This handsome tuxedo guy will be 2.4 years old in a week. He is my heart. My fur baby! He is the reason I understand the phrase – Who rescued who?

He is the first pet I have owned as an adult. It only took a year, working from home, in a pandemic to think about getting a pet. I decided to adopt a cat from the Oregon Humane Society.

Pets were hot ticket items during the pandemic. The process of adoption had changed. In person visits to the shelter were no longer allowed. An application had to be filled out online. I learned the hard way the series of next steps. Not only did you have to be the first person to apply for the kitten/cat, you had to pick up the phone the first time they call you.

I missed several of their calls because I was at work during the day when they called. You can imagine my disappointment when I listened to their voicemail. They were sorry because I didn’t pick up the phone they were moving on to the next person. After missing a few calls, I became more dedicated.

Every day for a full week, I sat down at the computer at exactly 5:00 p.m., when the OR Humane Society posted the daily allotment of cats. I applied for every kitten I felt drawn to ( which was 90% of them )

I started being naughty at work. No matter what I was in the middle of when I saw the unknown number on my cell phone caller ID come in, I paused work to answer the phone. Then one day I was able to answer their call. One of the kittens I applied for previously was back up for adoption. Did I still want him? Of course I did!

When the stars align and you make an appointment to pick up your cat, you can either- grab and go or meet and greet. I chose grab and go. It didn’t matter to me who was in the box, I wanted him!

He was destined to be mine. The girl ahead of me chose the meet and greet option. Poor little guy had an eye infection and didn’t like it when the girl approached his head for petting. The girl made judgements about his behavior. She didn’t want him anymore….which means the next person in line gets the chance.

Everyone told me it was better to get two kittens at once. I didn’t listen. An insightful suggestion that would prove true four months later. I adopted another cat from the OR Human Society. 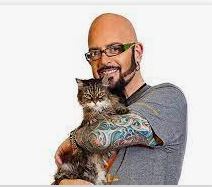 Have you heard of Jackson Galaxy? Thank goodness I discovered him. He was an intracule part of me learning about cats. I went down the rabbit hole and watched every single video of his I could find. Instantly improve your cat’s life with these 7 things

I wouldn’t be as good of a cat mom without all the information I have garnered from watching his videos.

Setting up Base camp, dust free litter, a water fountain, a variety of scratch pads and cat trees along with window loungers, toys, beds, and a wet food diet. Just to name a few

When the Monkey was an only child, he played with toys for hours. As he got older and when I added another cat, it has been a struggle since. I have been through every cat toy there is on the market. One day I looked through every page Amazon, Chewy, Petco, Etsy and the Shopping filter from Google had to offer. He just wants to harass the other cat at this point.

He will check out new toys for a minute or two only.

He has the quietest purr which I have only heard a handful of times. When he decides to sleep near me it is by my feet. He is affectionate when he is ready for bed or in the middle of the night. He rarely solicits this affection, he just doesn’t walk away when I pet him.

I have only seen him make biscuits three times in two years. It was on a Sherpa blanket. The internet said if your cat doesn’t make biscuits then you haven’t introduced the right material. Once I purchased 10 different cat beds from Amazon and he didn’t use a single one of them.

He likes to cry for attention and then not play with anything.

One of the more unbelievable things to me is that he doesn’t make any noise while throwing up. Not a peep. There have been several occasions where I turned around and not even a foot away from me there is a pile of throw up in front of him. Another time, I was looking at him on a cat tree when he opened his mouth and throw up came out of it. Had I not been looking at him, there wouldn’t have been any auditory clues.

Every cat has their quirks. Thanks for learning about a few of the Monkey’s.

I look forward to as long as I get to have with him. I hope he gets more snuggly and playful. Until then, I will take him as he is xo.