When I was 22 years old, I was keeping books for Coppertank Brewing Company in Austin TX. Although working at this place would come with some challenges, I would end up returning to it to deal cards after Vegas. It all started when my car broke down and instead of going to work, I took the day off to figure out how to get it towed from the gas station it was stuck at. I also needed to figure out how I was going to fix it. I am the only person I have in my life to make sure things get done. At that time, I was working at Celis Brewery. My supervisor offered to give me ride the next morning except when she arrived, she had a letter in her hand. They were firing me for taking the time to address my car. Thank goodness a girl I knew (you will hear about later in the story) told me about the position at Coppertank. I interviewed later that day and got the job. The bar business is a male dominated one. I felt pressure to keep up with Texas style grooming; fake boobs, fake tan, fake nails, even fake eyelashes because that’s whats Texas girls do. At times the misogyny was glaring. For example- one of the more popular t-shirts sold there said “Drink until she’s cute” The staff were all having sex with each other , even managers with waitresses. I was not in the mix of any of it.

One evening, they did something that was so upsetting, I quit on the spot. I just stormed right out. I woke up the next day in deep regret. I didn’t have a working car and now I didn’t have a job. I was full of apologies when I tried to get my job back but they weren’t having it. Too bad so sad for me. 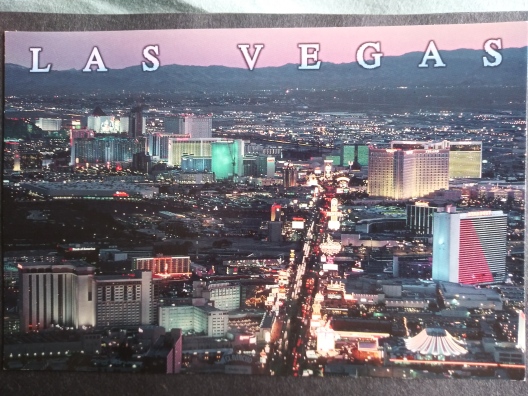 Before I could seriously look for another job, I had a vacation coming up. A long weekend trip to Las Vegas. I love to gamble and have been doing it since I’ve had a fake ID at nineteen in Cripple Creek, Colorado. It suddenly occurred to me I could stay long enough to learn how to deal blackjack, buy a car and return to Austin. I heard rumors about how much money you can make in tips so I figured it wouldn’t take too long to gather the funds. They are pretty much handing out loans to dealers and cocktail waitress because they know they would make enough money to cover it.

I needed to seriously figure out how to do this. The only people I knew in Vegas were my biological mother and younger sister. They moved to Las Vegas when I moved to Austin, the summer of 1996. It had only been about a year that I had started speaking to them again. Things were on shaky ground. Growing up, I experienced so much dysfunction I couldn’t get away fast enough. I left home at 17 and went four years without speaking to them. I decided to try again after the worst day of my life. Eeny, meeny, miny, moe- off to Austin TX I go. This Vegas trip would be the final straw to remind me of why I left and I would go another 3 years before speaking with my sister and another 6 years before having to see/speak with my biological mother for my sister’s funeral. I havent spoken to her since January 2011 and I don’t have the desire to ever again. Life became better without her.

I was living in a 2 bdr apartment and everything was in my name. I have had many roommates, none of them stable or good choices. My current male roommate was addicted to drugs and super dirty ( I knew neither of these things before he moved in because he lied) When I went to see his apartment, he had paid someone to clean it. I didn’t know this until after he moved in and we fought about his habits. A couple of times I snuck into his room early morning (because he was always passed out and getting up late) to steal his car keys and use his car to run errands. Guess I’m not the perfect roommate either. Although the only thing I really cared about in a roomie was they paid bills on time and the shared spaces to be kept OCD clean ( I still do) .

I talked to my roommate about my plans for Vegas. I told him I would send money for half the rent/bills each month, just please don’t screw me in any way shape or form. I would only need a few months before I would return. Maybe it would be better to not leave him alone? I really can’t trust this guy. I am taking a big chance leaving for an undetermined amount of time and I’m taking a big chance with where I would be staying in Vegas.

Last minute, I thought of someone who could take my place in the apartment. The only drawback is that we had broken up not too long ago. We weren’t dating anymore because he was an alcoholic with commitment issues. He was living with a couple who were wanting more privacy because they were planning to get married. They were hinting their desire for him to move out. The timing was perfect. He could pay half the rent and bills. This would allow me to save more money and get home faster. I could also have someone to keep an eye on my dirty cocaine addicted roommate.

We went out for a drink and I laid down some ground rules. I would de personalize my room to make it more comfortable for him. #1 Rule NO sex with other girls in MY bed. Take it to the living room couch (also mine). Better yet, go to her house! He would keep an eye on my current roommate and update me with any information I needed to be aware of. He would make sure the bills were on time. His #1 concern was getting stuck with my things. I assured him if the day came that something happened. I would come home immediately to take care of my business.

I flew to Las Vegas and signed up for dealing school. It was fun, I learned how to deal pitch. I learned how to check the chips. I memorized blackjack payouts from $1-$100. What takes most people 30 days to finish, I did in 7. 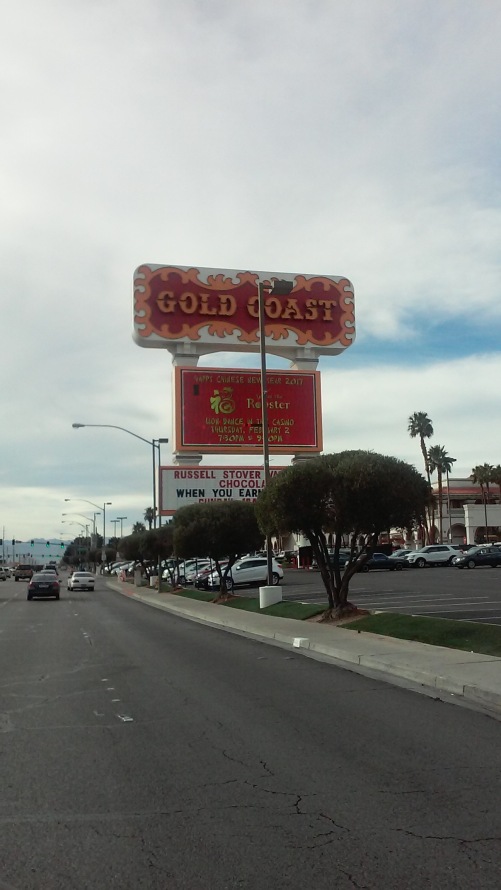 When you are new, there are only certain casinos that will hire you. They are called Break-In houses. They know you are new and going to make mistakes. I went for my live audition at the Gold Coast. I got the job! They hired me on the spot. I was assigned the night shift. The hours were 7:00 p.m. to 3:30 a.m.. The Gold Coast works on a 24 hour tip share pool. This means the person working at 6:00a.m. (when no one is playing ) is making the same amount of money as the person busting their ass Friday night at 11:00 p.m. 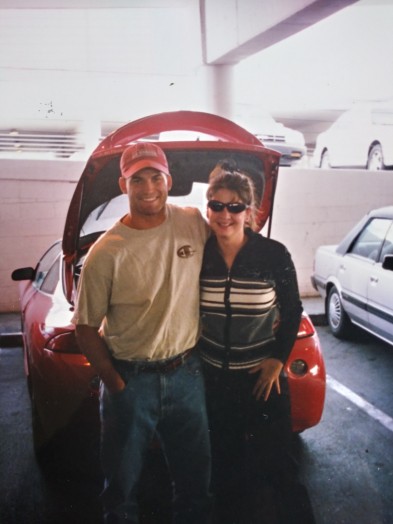 You’re not allowed to have people you know sit at your table to gamble so I didn’t let on when my buddy Joe and his friend drove up from California to play some blackjack. They followed me around to each table I would be stationed at ( since a shift includes working for 40 minutes and breaking for 20) then you get put at a different table. I would end up taking all their money.

They say it’s all about who you know, which couldn’t be more true in Las Vegas. I made friends with one of the female pit bosses. She nicknamed me Downtown Julie Brown. Do you remember that MTV host? Anyways, this would prove to be beneficial. It would ensure I never got picked for a “random” drug test. I beat a hair test to get the job. 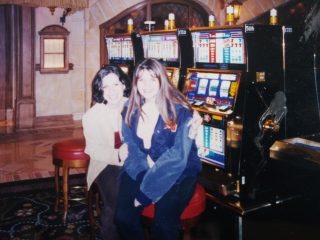 You know the day the guy I used to date was worried about. Yeah, that day came. He called me one morning, after three months, to let me know the other roommate was moving out. I would need to come back to Austin to take care of my business. I woke up the next day, bought a slightly used car ( light purple Saturn SC1), gave my two weeks notice and started to prepare to return home to Austin. I flew out a girl, whom I thought was my friend, to travel home with me. She turned out to be a frenemy. We then drove 24 hours straight home in time to celebrate New Year’s Eve with friends. This would be the year I would take 13 shots in addition to some cocktails resulting in giving myself alcohol poising. I may have turned 23 while living in Las Vegas however I wasn’t another year wiser.

Upon moving back into my apartment, I would end up having to live with that ex boyfriend for a few months. After a month a so we managed to find ourselves having sex on the couch. This naked time between us would result in another separation. I would end up asking him to move out. Sex on the couch = I known what it means. Coming into my bedroom for sex and then leaving to sleep for the night in your own bed = crossing the line = no commitment = you gotta go…

It wouldn’t take too long before I would see an ad in the paper for dealers wanted. Since gambling is illegal in Texas, it caught my attention. Turns out, there were several companies in town throwing parties with a casino theme. These types of parties are popular during the holiday season. Companies throw their employees parties, feed them, and give them drink tickets. We are the entertainment. Hopefully they offer incentive to play otherwise we stand around doing nothing but watching them eat, dance, and sometimes sing karaoke. They have become my entertainment.

I currently have a job with a casino company in Portland Oregon. I have been dealing blackjack since 1997. I held my gaming license for 10 years and now I teach people how to play. I have a feeling it will be a job that I do until I am old and can’t work anymore.

What starts in Vegas doesn’t always stay in Vegas LOL.